How journalists can use data from Johns Hopkins University, COVID Tracking Project, USAFacts, and The New York Times

By Irena Fischer-Hwang and Justin Mayo

The COVID-19 pandemic is a data-driven story. Daily counts of cases and deaths help reporters let the public know where, when, and how the contagion is spreading. Over the past month, a variety of datasets have sprung up to help track the virus. But which should journalists rely on? What’s the difference between them? What are the advantages and disadvantages to each? This guide will walk you through four major COVID-19 data sources: Johns Hopkins University, COVID Tracking Project, USAFacts, and The New York Times.

All four sources provide data on confirmed cases and COVID-19 deaths as a daily time series. COVID Tracking Project provides a current snapshot as well. They differ in the geographic level of detail (international, state, or county) and types of metrics included beyond cases and deaths, such as recovered patients, testing outcomes, and hospitalizations.

Each source generally pulls data from the same government agencies but at different times, which can lead to variation in daily totals. These differences can be significant, with national case counts varying by the thousands on a given day. The New York Times and Johns Hopkins tend to report the highest number of cases because they update later than the others. COVID Tracking Project updates their data earlier, so they tend to report the fewest number of cases. USAFacts is somewhere between.

One issue to watch going forward is how probable coronavirus deaths are handled. A probable death is one that was clinically diagnosed as COVID-19 but did not have a positive test for the virus. For example, on April 14, the New York City Health Department added more than 3,700 presumed coronavirus deaths to the city’s total. (The total number of probable deaths in NYC has since increased to more than 5,000.) As of May 6, 2020, Johns Hopkins University, USAFActs, and The New York Times are including all probable cases and deaths. COVID Tracking Project is not yet including presumed deaths if they are reported separately. This could change any day. Keep in mind that each state has its own methodology for counting COVID-19 deaths, including how they handle probable cases and whether they report them separately from laboratory-confirmed cases. (NOTE: This paragraph was updated May 6, 2020, to reflect The New York Times’ inclusion of probable cases and deaths.)

How each source handles specific geographic areas can vary. For example, USAFacts reports New York City data broken down into the five boroughs that make up the city, while other sources report one number for the entire city. The cruise-ship cases are also treated differently, with some assigning cases to a specific county or state and others not attributing them to a particular area.

So which data source should you use for your story? Overall, these four sources show similar trends for the U.S. over time. But when broken down by state or county, individual data points can vary depending on the update schedule, geographic definitions, and other factors. While it can be frustrating when data sources differ, it’s a good thing to have multiple sources to compare against each other. Local reporters should spot-check each of these sources against their own local agency websites to help decide which is best for them.

This guide has details about each of these four COVID-19 data sources, along with major caveats and exceptions:

And offers guidance on easy ways to get the data and decide what to use:

A dashboard made with data from the Johns Hopkins University Center for Systems Science and Engineering.

Get the data from Johns Hopkins University

The Johns Hopkins University Center for Systems Science and Engineering COVID-19 Dataset was the first to track the coronavirus and the only one discussed here that has international data. It provides daily time-series reports for countries around the world and several cruise ships starting on January 22. The data goes down to the county level in the United States, the state level in Australia, and the province level in China and Canada.

The data are pulled from a variety of sources including the World Health Organization, the U.S. Centers for Disease Control and Prevention, the European Center for Disease Prevention and Control, the National Health Commission of the People’s Republic of China, local media reports, and local health departments.

The JHU CCSE data has undergone a number of changes since its creation in January, which are important to keep in mind. In early March, reporting for U.S. locations changed from cities to counties, and in late March the time-series data were restructured. Additional changes to data are also noted in the data repository. Below are observations collected from journalists who have worked with the data. 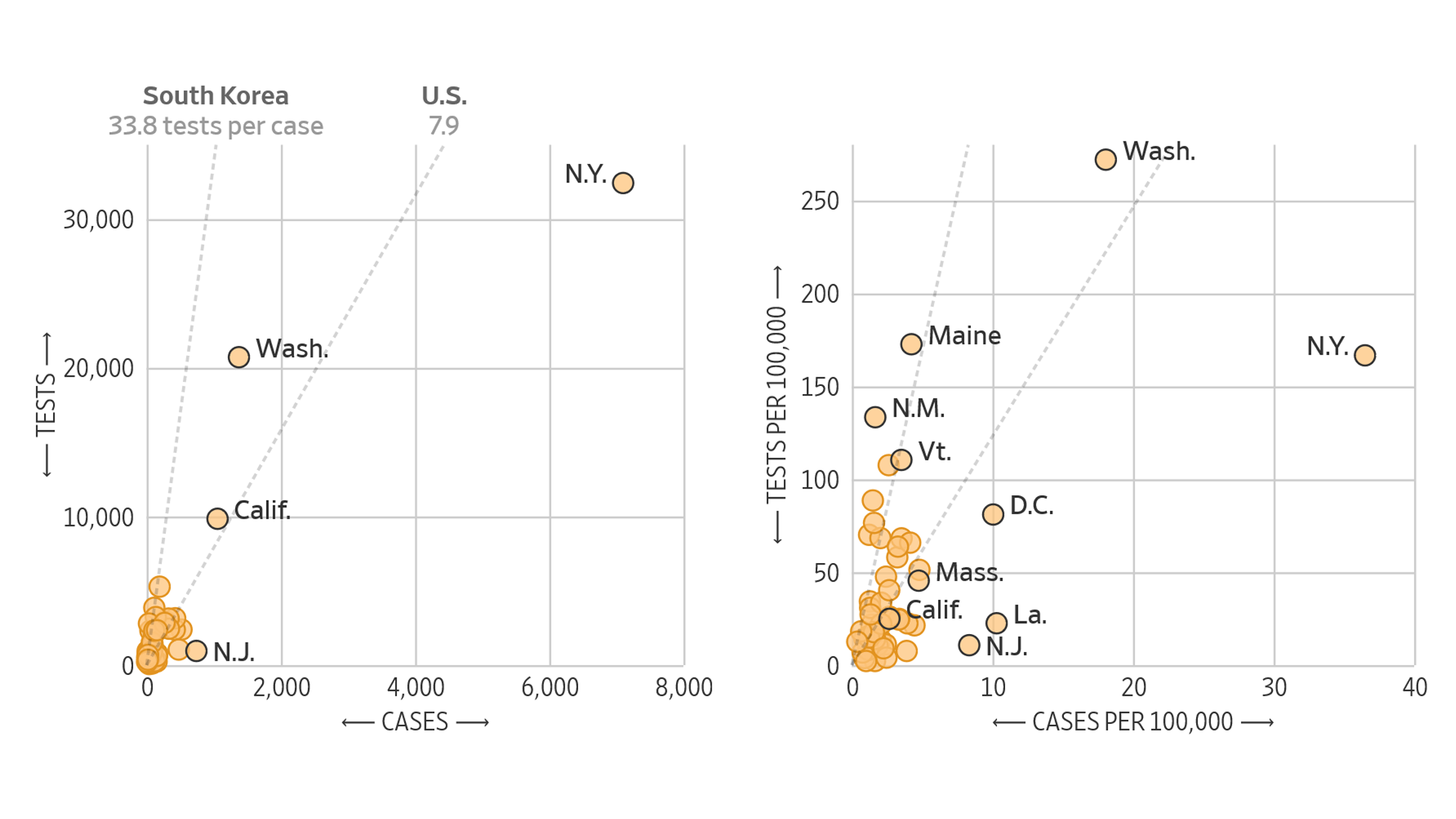 The Wall Street Journal made this chart with data from the COVID Tracking Project.

Get the data from COVID Tracking Project

The COVID Tracking Project reports COVID-19 data for U.S. states and territories, collected primarily from local government health agencies. It is the only source that currently provides details on test results, but does not go down to the county level. There are four CSV files released per day: current national data, current state data, national time-series data, and state time-series data. Each file contains a cumulative count of positive/negative/pending test results, deaths, recovered patients, hospitalizations, ICU patients, and ventilated patients.

Data for individual locations are updated at various times throughout the day as states release their latest information. The current data files are updated every five minutes with a timestamp showing when each state was last checked. The time-series data are updated once a day, usually by 5 p.m. EDT.

The Project recently launched the COVID Racial Data Tracker in order to make race and ethnicity data more accessible, and are interested in several subpopulations like nursing-home residents, health-care workers and information about tribes. 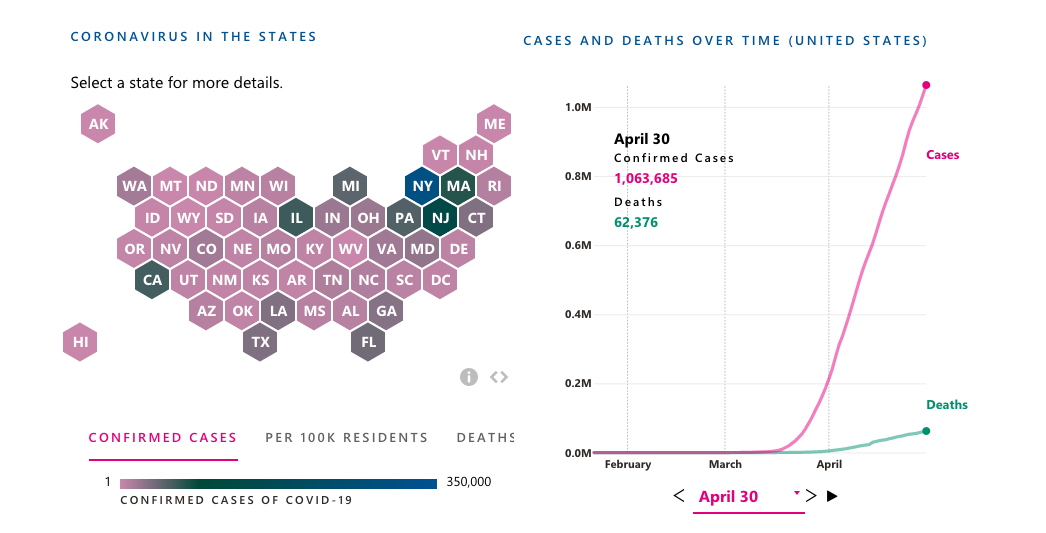 USAFacts displays maps and charts that use the data it collects.

Get the data from USAFacts

USAFacts time-series data has U.S. confirmed cases and deaths down to the county level. Two CSV files are provided: One has confirmed cases and the other has deaths. Beginning with January 22, each file contains county FIPS code, county name, state abbreviation, state FIPS code, then one column for each date with the number of cases or deaths. All county-level data is either scraped or manually gathered by USAFacts from state or local public-health agencies.

The data files are updated once a day, usually around 12 a.m. PDT.

USAFacts has been collecting additional metrics—recovered patients, hospitalizations, and cases based on race, gender, and age—and plans on publishing some of these soon. 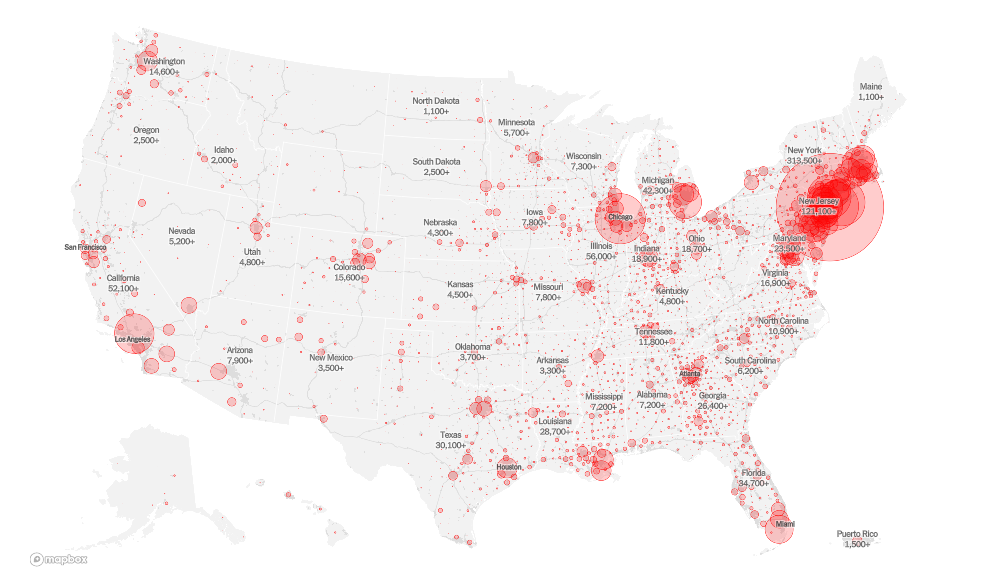 The New York Times uses its dataset for features like this map.

Get the data from The New York Times

This is time-series data for U.S. confirmed cases and deaths down to the county level. There are three CSV files released once a day: national-level data, state-level data, and county-level data. Each file contains date, county/state name, FIPS code, number of confirmed cases, and number of deaths going back to January 21. All data is gathered by New York Times reporters from state and local health departments or official government announcements.

The data is updated once a day in the morning, usually around 8 a.m. EDT, with data from the day before. Occasionally, they will do additional updates during the day to make revisions or corrections.

Big Local News, a collaborative effort and data-sharing platform for journalists, has been downloading and archiving all four data sources since mid-March. Journalists can log in to the free platform to access all of the case tracking data discussed here as well as other COVID-related data on hospital beds, associated demographic data, vulnerable communities, nursing homes and more.

Big Local News also has published a map of the daily case counts and deaths that is embeddable at the state and local level, using the New York Times data.

Choosing the right dataset for your story

All four datasets report the number of cases and deaths, and some of them also include data with other useful features. Here’s a table that summarizes the main features present in each dataset (note that these features may vary between data sheets within the same dataset):

Find more step-by-step COVID-19 data story recipes like this one. If you have questions about a story you’re working on, our free peer data review program is here to help.

Programs like these are part of the OpenNews COVID-19 community care package. If you’re using this story recipe, please let us know — we’d love to promote your work! If you’ve got a story recipe idea, we’d love to hear about it. Drop us a line at source@opennews.org. 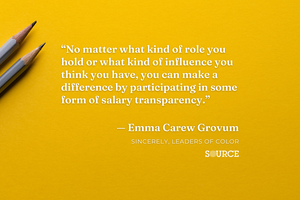 Sincerely, Leaders of Color: Everyone can help close the wage gap for journalists of color