Five Tips to Make the Most of NICAR

Take notes, take naps, and other advice for next year

This year, we asked four people who had never attended NICAR before—or were attending in a new capacity this year—to write up what they learned and experienced. —eds.

IRE’s annual Computer-Assisted Reporting conference (known as NICAR) brings together digital, data-driven journalists from all over the world. To someone who has never been to a conference, or a college student like me, the conference can seem intimidating. You may think you don’t have the prerequisite skills—or the resume—to keep up at this conference. However, NICAR offers trainings for every skill level, from people just learning how to use GitHub and Excel to people who want to use machine learning to analyze a dataset.

Here are some ways you can make the most of your NICAR experience.

1. Pick Your Sessions Ahead of Time 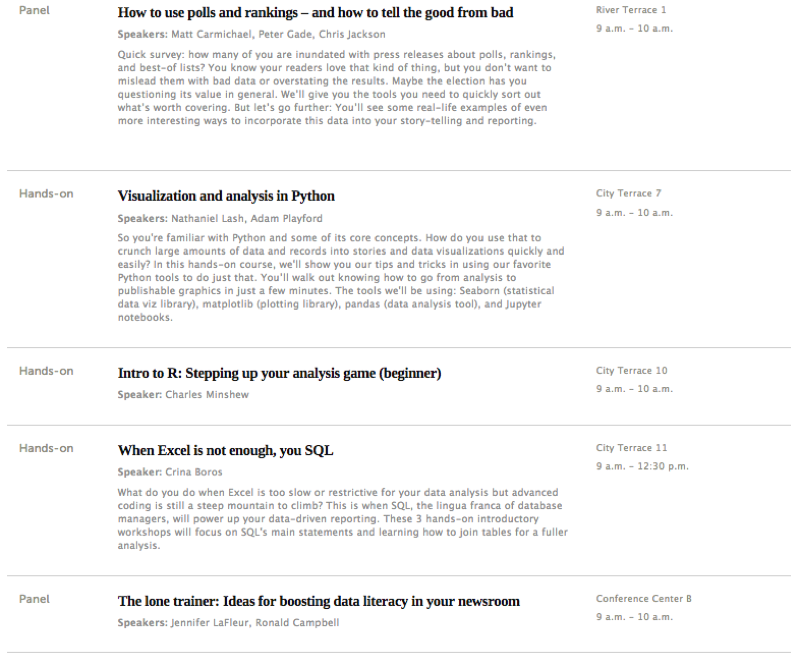 When you first look at the schedule, it can be overwhelming. Sessions are anywhere from 45 minutes to 3 hours, and there are often more than 5 sessions happening at the same time.

It’s crucial to go into each day with a game plan. This year, NICAR used the Guidebook app, which lets you add sessions to your schedule and notifies you if you’ve double- (or triple-) booked yourself.

NICAR sets up tracks for those who want to center their experience around a theme. This year they offered a design track which discussed workflows, design tools and publishing.

It’s fairly easy to glance at the schedule and create a theme for yourself. For instance, I went to several sessions that dealt with financial data and tax codes along with a few visualization demos.

Sessions are either hands-on trainings, panels or demos. If you’re going to a hands-on training, make sure you have the prerequisite skills. I went to a D3 session with my intermediate JavaScript capabilities and got lost within five minutes. Still, it was useful to see what the library is capable of.

NICAR gets rock-star panelists. I got to listen to reporters from the Atlanta Journal-Constitution, which won numerous awards for its Doctors and Sex Abuse series, the Palm Beach Post, which used mortician’s records to find and profile people who died of heroin overdoses, and ProPublica, which did an incredibly informative series on racial bias in judicial sentencing algorithms.

Check the schedule for repeat sessions, which might help break the tie between two sessions you wanted to go to in the same hour. 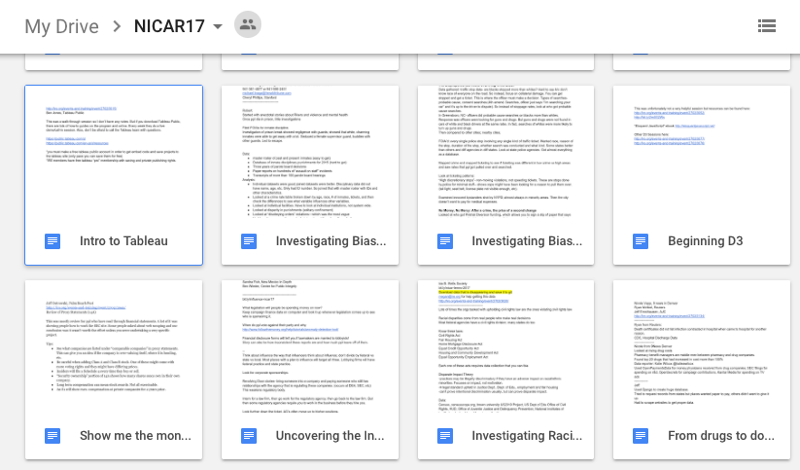 Without writing anything down, my brain is a bit like a sieve. By 5 p.m. Saturday, I had to check my notes just to remember which sessions I had attended.

For hands-on trainings, I’d recommend using a screen recording software, like Screen Replay, so you don’t have to take notes while following along. Otherwise, take notes however you wish!

Miss out on a session you really wanted to go to? Ask friends and co-workers if you can exchange notes, or use Twitter to find someone like me who made their notes public.

Within a few days of the conference, IRE posts tipsheets and slides from many of the sessions here.

Everyone I spoke to said the key to a great NICAR experience is knowing your limits. With only 15 minutes to collect your thoughts and get to the next session, it can feel like an intellectual (and physical) marathon.

Each day I picked one hour to sit out, write up notes, answer emails or take a nap. At first I felt guilty. I’m wasting a whole hour that I could spend learning! I quickly realized my ability to learn operates on a bell curve, dwindling after three or four sessions. Taking breaks helped me reset and make the most of the sessions I went to. 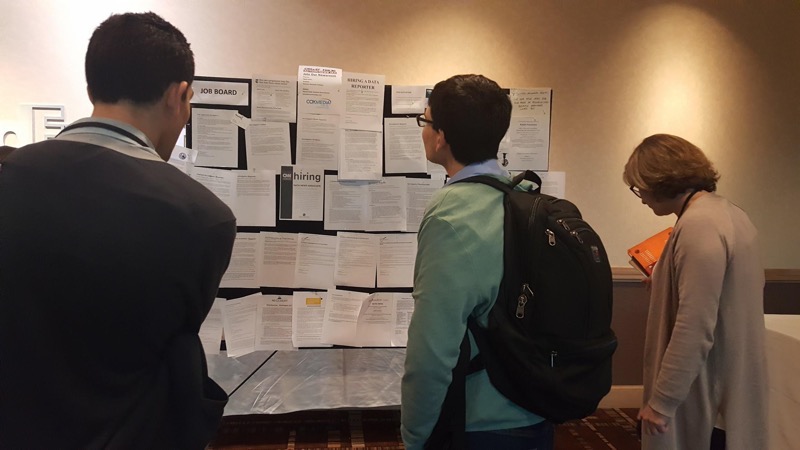 The famous NICAR job board

Talk to everyone. It’s not rude or a conference faux pas to approach strangers here.

Everyone wears nametags with their company on them. Don’t be afraid to strike up a conversation someone just because they work for your dream publication. If that’s too intimidating for you, NICAR veterans wear stickers on their nametags indicating newbies can talk to them.

As a student, I was worried no one would want to talk to me, but this was not the case. Students connected over the different skills their schools taught, internships they had done and the stress of application season. In turn, industry professionals seemed genuinely interested in what journalism schools were teaching these days.

Many companies use NICAR to scout talent. Check the job board regularly and make time in your schedule for some “speed dating” with people who are there looking for candidates.

Whether you’re looking for a job or not, bring business cards so people you meet can follow up with you. It helps to advertise that you’re at NICAR by putting the conference hashtag in your bio or a pinned tweet. 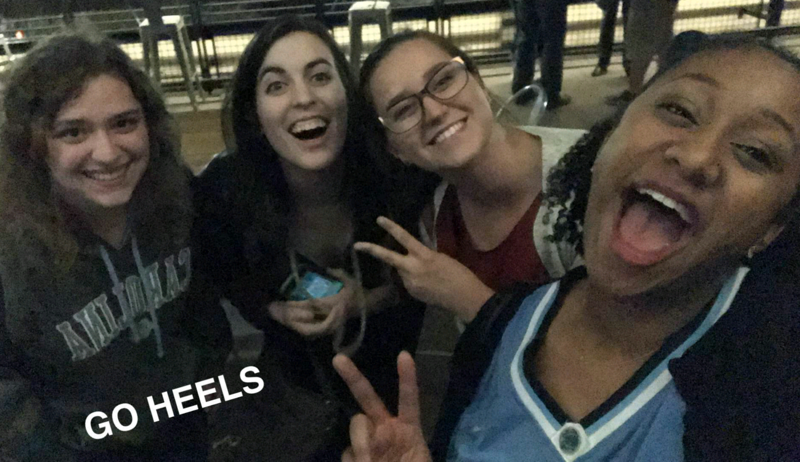 After a long day of intense training, it’s tempting to just crash in your hotel room. Somehow, attendees find the energy to go out every night.

People familiar with the area will share lists of their favorite bars, restaurants and shops. Look up what’s going on downtown and make a point to get away from the hotel for a bit. The NICAR conference in Jacksonville coincided with a national bull riding competition, a dog festival and an art walk.

Join meetups centered around Slack groups (like the Lonely Coders Club, your alma mater (I spent Saturday watching the UNC-Duke game with about a dozen other Tar Heels) or other professional organizations. This is a great time to catch up with friends who work on the other side of the country (or world!).

Remember, sessions start at 9 a.m. NICAR is hard enough without spending the first few hours of each day hungover.

Next Year’s Conference Awaits You

If you’re even slightly interested in learning new reporting techniques (and if not, what are you doing?) I recommend looking into this conference. My only regret is that I didn’t start going my freshman year. There are workshops for every skill level, so don’t feel intimidated if you’ve never touched an Excel sheet before.

Still not sure if you want to go to next year’s NICAR? Would it change your mind if I told you it’s in Chicago?

Best news from #NICAR17 is the location of #NICAR18 pic.twitter.com/S0Kex8X0h2

What kind of change could we create, if we truly came together?