EDITOR’S NOTE: This article is based on this presentation for NACIS 2022.

My name is Aaron, I am a freelance journalist who specializes in interactive, map-based storytelling. My work typically revolves around “small data” — that is, datasets I collect by hand and by foot, rather than compile or scrape from other sources online. In a recent story for the New York Times, co-authored with Denise Lu, we collected one such small dataset because it otherwise didn’t exist. The story is about the Chinese street signs of Manhattan’s Chinatown, the history of which has largely been lost to time.

There is a long tradition of Chinese residents in American cities giving Chinese names to city streets. The process of giving Chineses names was informal, so names varied from person to person, map to map, and one street could have many different Chinese names. For example, William Hoy discusses multiple names for Waverly Place in San Francisco’s Chinatown in a 1943 article from California Folklore Quarterly. Some knew it as T’ien Hou Temple Street (from a large temple located on that street) while others knew it as 15 Cent Street (from the cost of haircut at the many Chinese barbershops that lined the street).

In 2016, I reported a story for This American Life about these varying names for streets in Manhattan’s Chinatown. In the course of that reporting, I came to learn that in New York City, perhaps the most linguistically diverse city in the United States, Chinatown is the only neighborhood where streets were given official names in another language. 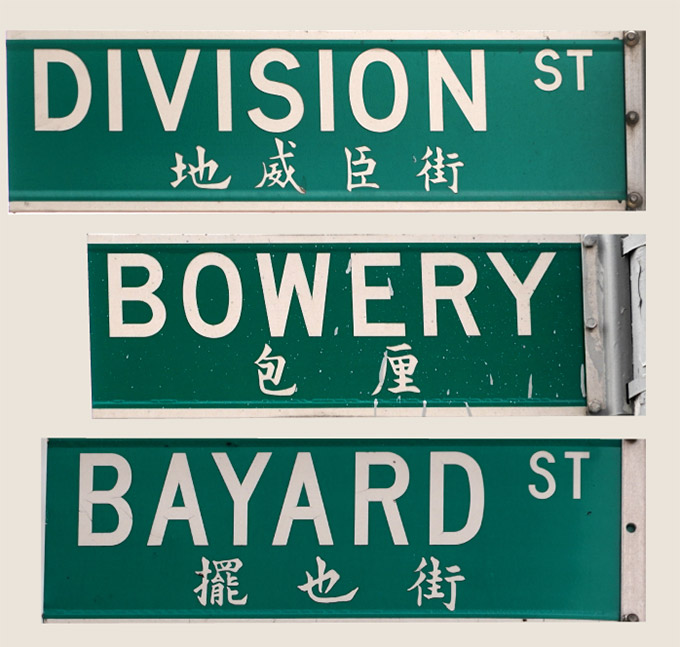 Why and how this happened… How the official names were chosen… Who was responsible… Answering these questions became an obsession that eventually culminated in a four-chapter, interactive, multimedia investigation for the New York Times.

In 2016, I started to scour local records for any information I could find on these signs. I searched the archives at the Museum of Chinese in America, I visited every government office that could have conceivably been involved, and I reached out to local history buffs and longtime Chinatown residents and activists. But my first real clue came from a thin folder in the back of a dusty filing cabinet in a Chinatown library. The article, from 1985, was celebrating the installation of bilingual Chinese street signs on 40 streets in Chinatown.

I live in Chinatown, and I knew that there was no way 40 streets had these signs. So my reporting partner at the time, Jenny Ye, and I did what journalists often do, we filed Freedom of Information Requests to get more information from the city. We asked the Department of Transportation (and any other tangentially related city organ) for any records on where and when these signs were installed, and when and where they were replaced with English-only signs.

We were not met with much help or support. Multiple requests worded in many different ways were rejected. I also was laughed out of several city offices. We did, however, receive fragments of old internal memos from the Department of Transportation that seemed to confirm that bilingual Chinese signs for 40 streets were ordered to be printed in 1985.

Years later, when Denise Lu and I started formally reporting this as a New York Times story, we started a new round of requests to city agencies for more information. Over the course of almost 100 emails, we realized that a lack of institutional knowledge, destroyed and lost records, and a general lack of employment continuity meant that the city of New York simply didn’t know how many signs were printed, why, where they were installed, and when so many were taken down.

So we had to gather our own data.

Hitting the streets, the library and Netflix 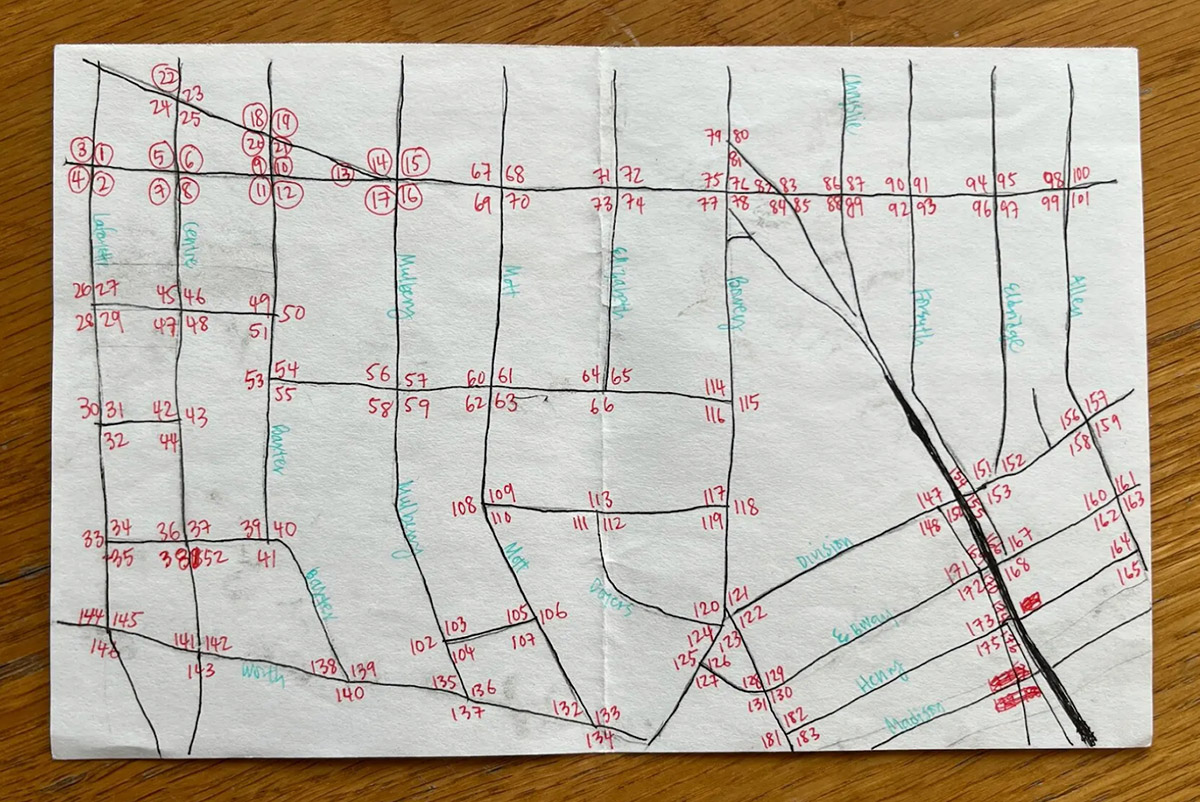 In order to count how many signs still existed, Denise mapped out a walking path, which in total was 12 miles. She wanted to hit every intersection where there could possibly be a sign. Before the walk, Denise drew a skeletal map with numbers on the intersections for reference later as I kept track of the signs on each corner. This was the easiest and quickest way for me to keep track of the streets as we were walking, much easier than anything digital. Also, the streets in that area are so clustered together, by making her own map she could fudge the geography a bit and space things out. After the walks, Denise put all the data into a spreadsheet to keep organized, just like any other data story she would normally do.

After our walk, it was clear that there were many more signs printed in 1985 than were currently on the streets in 2021—supporting our suspicion that these signs were disappearing.

But we needed to find official confirmation. Denise looked at all the corners on historical snapshots on Google Street View, which goes back to 2009. She found four examples where bilingual signs were either removed or replaced with English-only signs. 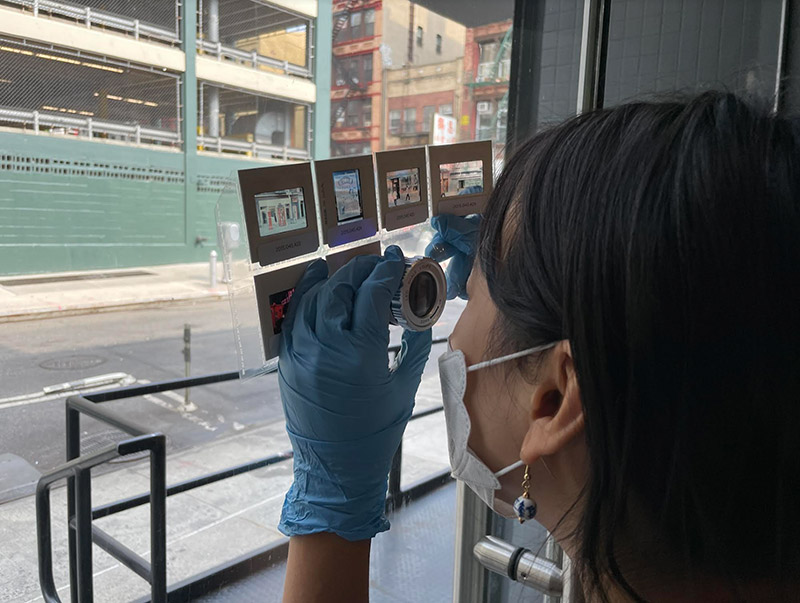 We looked at archives in the city to try and find more photographic evidence of signs that no longer exist. Revisiting the Museum of Chinese in America, we began the tedious but rewarding process of going through thousands of archival photos by hand, hoping that a street sign was accidentally captured in the background of a photo of something else.

I sought out every single book I could find ever published about NYC’s Chinatown, scouring every photograph within them with a magnifying loupe. I also sought out any movie filmed in Chinatown in the mid–80s, looking for any street signs to map to a date. I sat through many bad (and often, overtly racist) movies, including Year of the Dragon and Gremlins 2: The New Batch.

After nearly a year of reporting with Denise, we felt confident that almost a third of the bilingual signs installed in the 1980s had been replaced with English-only signs.

An incredibly talented group of people at the Times helped put the story together: Meghan Louttit (editor), Umi Syam (designer), Andrew Hinderaker (photo editor) a print designer, photographers, editors—and many other people who helped in other ways.

For the map design, Denise found a map of San Francisco Chinatown from the 1920s by J.P. Wong. She really liked how it was a truly bilingual map of English and Chinese. It served as inspiration for her NYT map. She also used a Japanese book on color theory to find a color combination fitting for an archival look similar to the J.P. Wong map. In the end, Denise went with a simple map design that emphasized the streets and the two languages. One map showed our data findings of where we knew there were bilingual signs that were no longer there. It also serves as a map to show the Chinese names of streets on the existing signs.

We believe that this is the first time a New York Times map was published with Chinese on it. Denise particularly loves the compass she used, which has North in Chinese, also inspired by J.P. Wong’s map that used Chinese in all four directions. With Chinese, Denise also had the freedom to use types that flowed horizontally as well as vertically, which was an interesting exercise in mapmaking she had not done before. 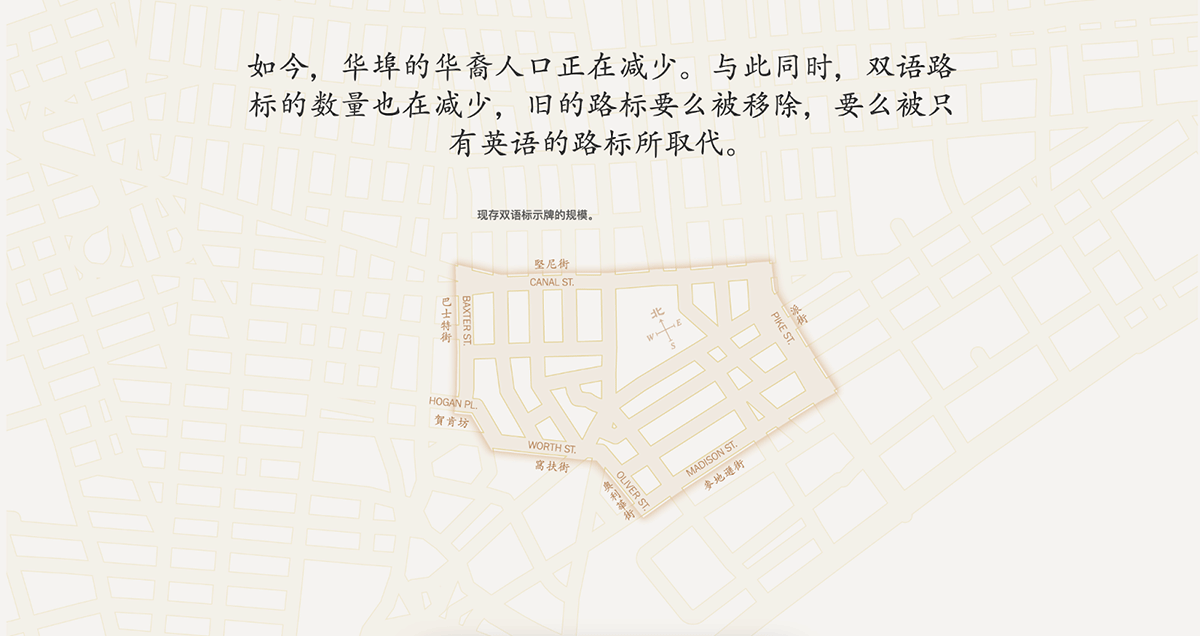 We also translated the piece and the graphics into Chinese for the web. The final print product was impressive because we had a wrap-around (front and back cover) in the Metro section for the New York edition and two full page spreads. A lot of people were really excited to see Denise’s Chinese maps in print and to hear people speaking such a diversity of Chinese dialects on the web version, in the paper of record.

It got some splashy coverage in the local Chinese press as well. A lot of people took notice, and a member of the New York State Assembly for the 65th District started bringing up these disappearing street signs, as did many many people active in Chinatown.

For me, the success of this story and the reception it received—especially in Chinese and Chinese American communities—helped to reinforce a few notions that have been increasingly guiding my work. Specifically, the power of:

Most substantially, Chinatown’s City Council Member (Chris Marte) introduced a bill to not only replace the missing signs in Chinatown, but open up this process of street-name bilingualization to any other neighborhood in NYC that needs or wants them. As of now, at least one new bilingual sign has been installed, and it seems that more are on the way!