There are few newsroom cliches more stale than the one that says “every night is election night on the sports desk.” But if there’s any grain of truth in it, then the World Cup must be a month of election nights.

For this year’s edition of the World Cup, the analogy holds up a little better, largely because this tournament has been a showcase for some of the best interactive storytelling and data visualization we’ve seen since, well, election night.

FiveThirtyEight brought its statistical models to the World Cup, handicapping each team’s chances of advancing from the initial group stage to the knockout rounds and then deeper into the tournament.

Similarly, the New York Times’ Upshot offered odds on how likely teams were to progress. But what was even more cool about this piece from the Upshot, at least as I watched it during the workday afternoon matches, was that as each group played its final matches, the app offered a live breakdown of the current standings, along with the time left in the game.

“…we at The Upshot have been obsessed with helping you understand the variety of possible outcomes: what teams must do to win their group, advance or, at the very least, spoil the fun for others.”

Whenever a team scored, the app updated within seconds, showing the latest view of who would progress and who wouldn’t. It was a one-stop dashboard for the most pressing question that many fans had: “Right now, will my team make it out of the group stage? And if not, how much time do we have left to try to win?” 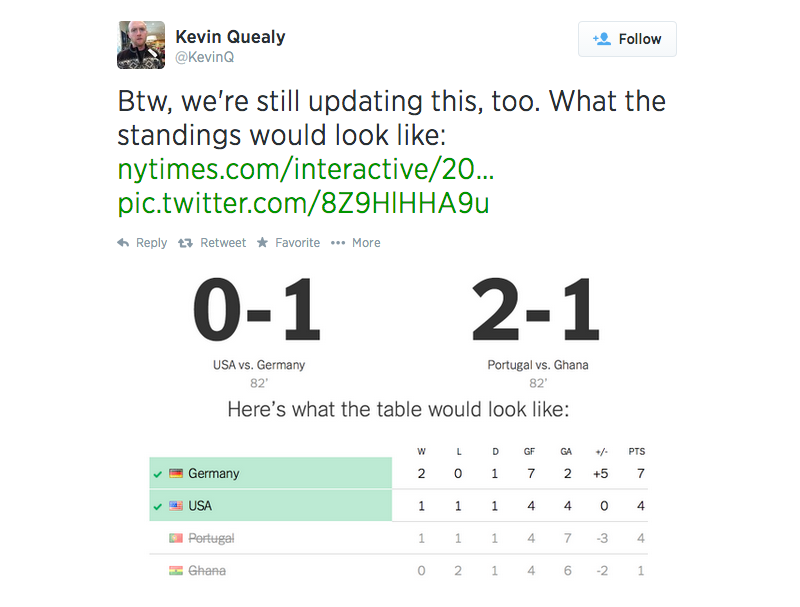 In a similar vein, for the United States’ game against Germany, the Upshot used a square pie chart to show the 984 possible score combinations that would determine whether the Yanks would keep going in the tournament. During the game, the app updated in real time, showing the current score along with the possible next scores and whether they would help or hurt the U.S.’s chances.

The Huffington Post’s live match reports, powered by a feed from the popular Opta sports data vendor showed the shape of the teams and the location of every shot, along with touches, passing percentage and other stats for every player. 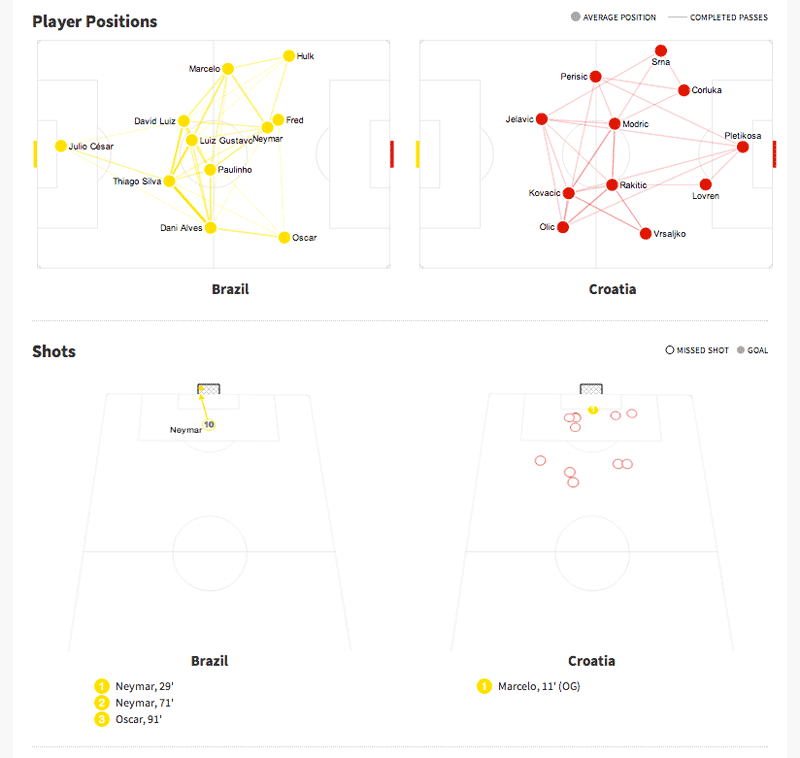 Chartball.com also used a feed from Opta to craft post-game recaps for the Wall Street Journal. 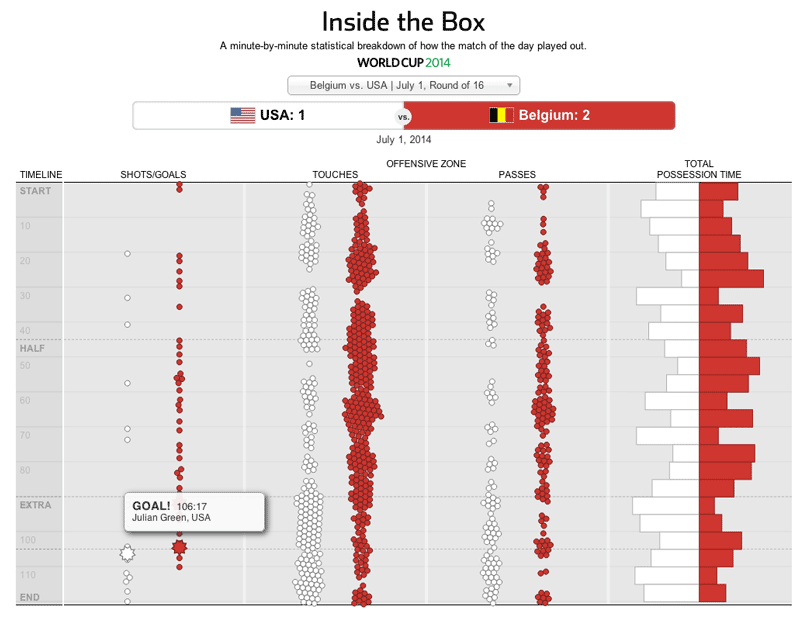 A few other apps focused on a single critical play. Leading up to the World Cup, the Wall Street Journal profiled U.S. head coach Jurgen Klinsmann, and as part of the piece, the Journal compared the differing playing styles of several national teams. The interactive graphic contrasted the straight forward tactics of a country like Portugal (get the ball to Cristiano Ronaldo and let him do his thing) with the elaborate passing of Spain. It’s one thing to read about Spain’s tiki-taka. It’s another altogether to see each of the 42 passes they strung together before scoring against Scotland in a game in 2011. 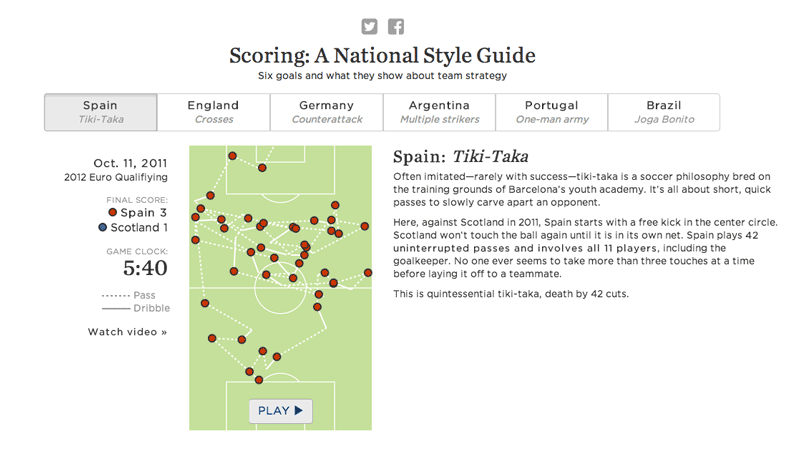 In the past three weeks, scads of great work has been done on other aspects of the Cup. The Washington Post analyzed whether the U.S. was really being punished when it drew the worst travel schedule in the tournament. The Wall Street Journal visualized how the best penalty kick takers on each team in the round of 16 tend to shoot (for more on this project, see our chat with WSJ news developer Chris Canipe).

Two apps illustrated how the players on each nation’s team spend most of their professional life playing together on the same club teams and in the same leagues.

Before the tournament started, the Guardian collected the good, bad, and ugly jerseys from World Cups past for the 32 teams who qualified. The Guardian US’s interactive team has been tracking the race for the Golden Boot, which goes to the top scorer in the tournament. The app also looks at how often the Golden Boot winner has historically pushed his team to victory in the final.

The Wall Street Journal took an interesting approach for a static graphic and calculated its own telling metric about the sport. The Journal’s team counted the amount of time each team spent during its group stage games theatrically rolling around on the field with mysteriously fast-healing injuries.

While many have done fantastic work so far, the New York Times has released an incredible stream of clever and engaging projects at a rate that is unmatched. The Times drilled into the history and construction of the iconic balls used at every World Cup since 1930. It employed animation and sound to tell the story of the goalkeeper who made all of Brazil weep in 1950. It explored the exuberant commentators’ voices that become inextricably tied to the best gooooooooooooooals. One of the most fun news games of the year is the Times’ Spot the Ball in which a user has to try to guess where the ball, which has been digitally erased, should be on a photograph. (Trust me, it’s addictive. You have to try it.)

With three rounds remaining in the Cup and games resuming on Friday, we can only hope that there will be even more great visualization work coming in the next couple of weeks.

Did I miss one of your favorite interactive visualizations or World Cup apps? Tweet at me or share it in the comments.