How We Made a Bot that Pours Wine on Television

I don’t wear a lab coat to my job at the NBC News’ TODAY show, although it may sound like I should, given my title: Head of Innovation Labs. But I do approach every project as an experiment—where we quickly and inexpensively build, measure, and iterate on tech that supports our brand.

One day last fall, I was at my desk tinkering on an internet-connected candy dispenser for the Halloween show. A colleague noticed what I was working on, and he asked, “Hey, can we do something that pours wine?”

(The question makes more sense if I explain that, while Kathie Lee Gifford and Hoda Kotb are hosting the fourth hour of TODAY, they usually drink wine.)

I thought, yeah, something that pours wine could be an interesting technical project. But we’d need a logical reason to use it during the show. We never pitch new lab projects by saying, “I want to do something with [insert name of cool tech XYZ here]. Rather, it needs to be, “Here’s how this can enhance the experience for our viewers or users.”

For a wine-pouring bot, I realized we might actually have a great hook. Kathie Lee and Hoda often fall on opposite sides of whatever topic they’re discuss during the show. Plus, we regularly do Twitter hashtag battles during the earlier hours of the show.

So, to combine all of those pieces: As Kathie Lee and Hoda discuss and debate, we could hold a hashtag battle where the “score” is being tallied by a bot. A bot that pours wine. A WineBOT.

I built the first proof-of-concept prototype and demoed it to the broadcast producers. They loved it, and I immediately started working on the version of it that we use now.

The technology behind the WineBOT is actually pretty simple. The main piece of hardware is an Arduino Uno that has two DC motor liquid pumps, two relays, and two buttons. Each of the liquid pumps has two long, food-safe tubes attached, one that goes into a wine bottle and the other that goes into the glass. The buttons are just for priming the pumps, right before the start of the hashtag battle.

Also, since we were dealing with wine, we needed a way to protect the hardware from getting wet when something eventually spilled. So I procured a plastic enclosure box, one that’s normally used for housing utility cables on the outside of a home or building.

For the software portion of this, I hooked the Arduino into my laptop, and I use the node.js library johnny-five to control the hardware. For the real-time hashtag gathering, I use Twitter’s Streaming API via a version of the Twit library, which I modified so it could work properly inside our corporate network firewalls. The software listens for the two hashtags “#TeamKLG” and “#TeamHoda” and each tweet turns on one of the pumps for one half of a second.

Right after the hashtags are announced on the show, we get a flood of tweets at pretty much the same time. If the pump we want to turn on is already in use, the software just “banks” those additional tweets until the pump is free, and then it sends those saved tweets through.

While I was building out the technology, our amazing design department at TODAY mocked up what the prop that sits in our kitchen set would look like: 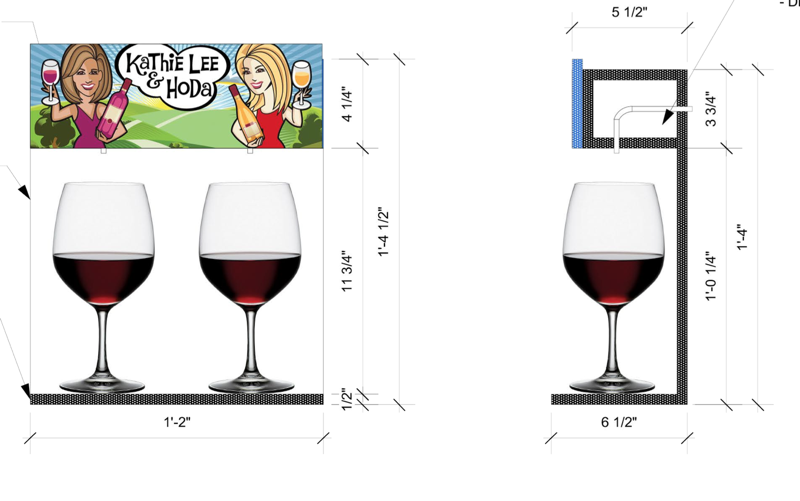 From an audience perspective, the WineBOT works like this: The hosts pose a question to the audience, and each host then states the case for her particular answer. We then ask the audience, on broadcast and on social, to tweet with the hashtags #TeamKLG or #TeamHoda, depending on which host they agree with. Every time someone tweets #TeamKLG, Kathie Lee’s glass gets a little more white wine. Every time someone tweets #TeamHoda, Hoda’s glass gets a little more red wine. Both the hosts and the audience can see who is “winning” just by looking at the fullness of the glasses.

The show now uses it almost every Wednesday (or as we call it, “Winesday Wednesday”), when the hosts disagree on something. Here is the WineBOT in action.

WineBOT and the Bigger Picture

NBC News is a large, traditional media organization. How do I get unusual tech projects, like the WineBOT, approved, built, and embraced?

I’ve been granted a certain amount of freedom to try new things and as long as, regardless of overall success or failure of the experiment, we always learn something. I firmly believe there are many people inside larger organizations that have the drive and capabilities to experiment responsibly with new ideas, platforms and technology and we just need to give them some leeway.

Also, while that freedom is important, I believe that embedding myself in the team has really been the key. Unlike innovation roles or teams you might find at other large companies, I see myself in much more of a supportive and facilitative role and much less a visionary role. I use my background in business and engineering to evaluate ideas and execute on the feasible concepts that we genuinely believe will enhance the stories that we want to share with our audience.

The WineBOT is a great example of how a spark of an idea can come from the larger team. Kyle Michael Miller, who manages Kathie Lee and Hoda’s social presence, asked me that original question as I sat tinkering at my desk with a candy machine. In the lab, we look for “eureka” moments everywhere.