Introducing Streamtools: A Graphical Tool for Working with Streams of Data

We see a moment coming when the collection of endless streams of data is commonplace. As this transition accelerates it is becoming increasingly apparent that our existing toolset for dealing with streams of data is lacking. Over the last 20 years we have invested heavily in tools that deal with tabulated data, from Excel, MySQL, and MATLAB to Hadoop, R, and Python+Numpy. These tools, when faced with a stream of never-ending data, fall short and diminish our creative potential.

In response to this shortfall we have created streamtools—a new, open source project by the New York Times R&D Lab which provides a general purpose, graphical tool for dealing with streams of data. It offers a vocabulary of operations that can be connected together to create live data processing systems without the need for programming or complicated infrastructure. These systems are assembled using a visual interface that affords both immediate understanding and live manipulation of the system.

Like all projects at the Times’ R&D Lab, streamtools is designed to probe a particular future approximately three to five years away. For streamtools, this future is defined by three predictions:

Streamtools is flow-based: data is routed through a series of operators we call “blocks.” Each block does one particular thing: for example, counting all the messages that arrive, or filtering messages based on a “username” field. Blocks can be arranged in arbitrarily complex patterns, allowing you to design sophisticated, easy-to-read workflows without writing any code.

A simple example of a streamtools pattern is a poller. At street level, 28 floors below the R&D lab just outside the northern New York Times entrance is a Citi Bike station. We can’t quite see the station from the lab but, happily, Citi Bike provides a live data feed of all their data - so we can keep track of how many bikes are outside! It’s a rather busy station. 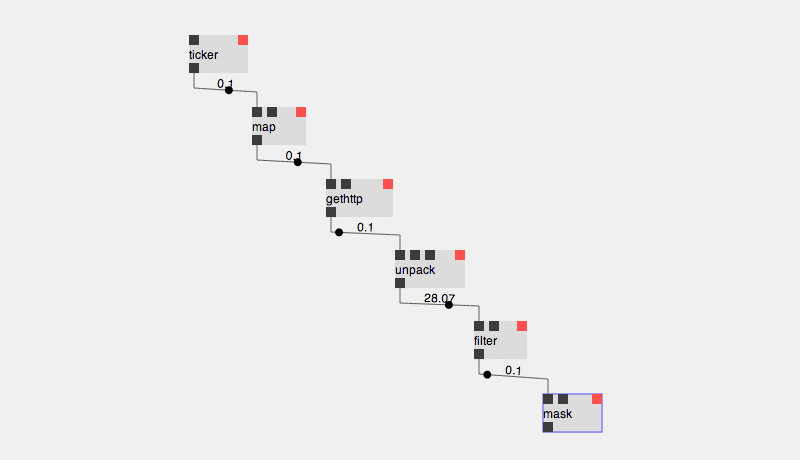 We use streamtools to poll the Citi Bike endpoint, extract the number of free bikes then connect over a websocket to make a big counter on a screen in the lab. The pattern for this is in the image above, and goes as follows:

We then listen to the filter block’s websocket to create our live feed of available bikes! To make your own feed, install streamtools, and import the Citi Bike pattern.

Another example is how we keep track of page events we get on the New York Times website. In the lab, these events live on an NSQ queue, which we’d like to consume to find out about the dynamics of the traffic on the site. 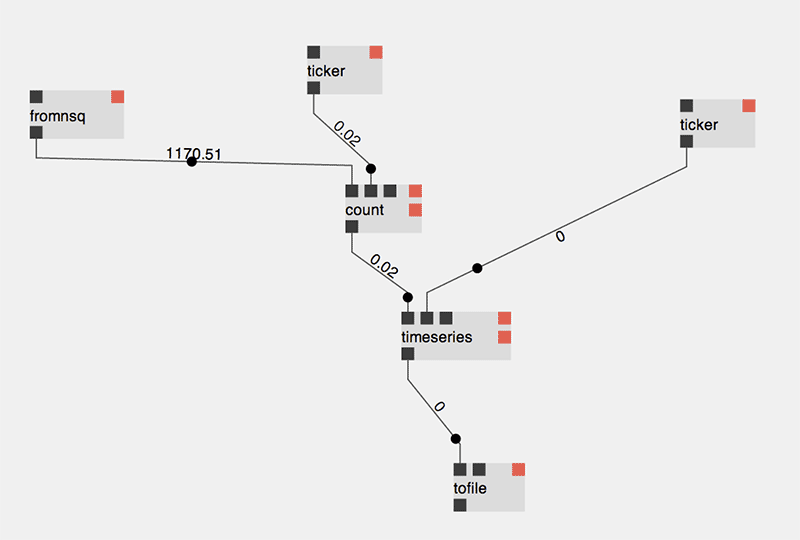 Making a timeseries of NYT traffic

We use streamtools to receive event data from the queue, count it, and store the resulting timeseries. The pattern for this is above, and goes as follows:

Streamtools provides a graphical interface that runs in a browser, allowing the user to create, connect, interrogate and delete blocks.

Each connection displays an estimate of the rate of messages going through it, and the user can always look at the last message that went through that connection. Each block displays the possible inbound and outbound routes that it supports. For blocks that maintain a state, the interface provides a method of querying that state.

Streamtools’ web interface aims to be responsive and informative, meaning that you can both create and interrogate a live streaming system. At the same time, it aims to be as minimal as possible—the GUI possesses a very tight relationship with the underlying streamtools architecture, enabling users of streamtools to see and understand the execution of the system.

Streamtools provides a full, RESTful API, which you can read more about on the streamtools README. Everything in streamtools is represented as JSON - the currently running pattern, every block, every block-rule and every block-state, and it’s all queryable.

Every block has an associated websocket and long-lived HTTP stream, meaning you can easily hook streamtools up to a visualization, a product-prototype or the next stage in your analysis pipeline.

As a research project, streamtools is a platform to explore new algorithms and methods of analysis, as well as an exploration of graphical programming. We are looking forward to exploring these aspects of streamtools over the coming months.

We have also found that streamtools allows us to be extremely expressive when building other data-based prototypes in the lab, and so we hope that it will generally useful in the wider worlds of data science and analysis. Hence we will be maintaining streamtools as an open source project, available at https://github.com/nytlabs/streamtools.

The blocks will continue to evolve as we work through use cases at the Times. We hope to be supporting the development of testing frameworks, as well as some forms of audience analysis. We hope streamtools will allow the development of quick-to-build, targeted dashboards for individual projects, and will promote a deeper understanding of the data that runs throughout the building.

Streamtools is completely open source (Apache 2 license), written in Go—a modern compiled, concurrent language. If you have ideas, concerns or discover bugs please let us know! You can always raise an issue on our issues page, and if you fancy getting your hands dirty, pull requests are always welcome!