How six news orgs are covering the president’s staffing choices

With a new administration there’s a lot to keep track of—campaign promises, 100-day plans, day-one measures, and of course, staffing. The Trump administration is quickly filling up key positions on its staff, and publications are doing their best to inform their readers of those appointments and nominations. Some have resorted to building out custom pages to track the moves, but no two are exactly alike. Let’s take a look at how they differ.

But first, welcome! This is the first of an occasional series of posts I’ll be writing here about how news organizations around the world are going about the same things differently. The plan is to focus on the types of work like this, the pieces that don’t fit neatly into our CMSes, or that need custom design or code. I’ve been doing this work for seven years and remain fascinated by the varying approaches to the same subject matter. When news breaks, (or perhaps when news is planned 12 months ahead) how do we in media make the same things, differently?

So far I’ve seen seven publications take a stab at breaking down the newly forming Trump team: The Washington Post, The New York Times, CNN, NPR, The Wall Street Journal, The Boston Globe, and Quartz. That last one, I made with Nikhil Sonnad.

Let’s consider what each publication chose to include:

Every publication is tracking the cabinet positions. When it comes to tracking the most positions, NPR takes the cake with 22 non-cabinet roles in their tracker. The one I made at Quartz is the lightest, with only cabinet-level positions.

Of course nominations aren’t kept very secret in the run-up to official announcements.

CNN, WaPo, NYT, and WSJ all list people rumored to be under consideration for certain posts. The rest do not.

The decision to include rumors is as much an editorial choice as a design one. Keeping track of rumors requires not just more effort by reporters to keep their finger on the pulse of the transition but also puts more demands on the staff required to add to and update the piece.

The designs of the pieces fall into two buckets: those that first provide visual overview of all appointments, and those that jump straight into details on appointees and summaries of each position.

Both methods have utility. A reader looking for information on the latest appointee announcement might only be interested in that person’s biography—an overview would get in the way. A reader who hasn’t been following appointments closely and wants to check on the transition’s progress would probably be better served by seeing an overview of the appointments first to get a lay of the land.

The Washington Post, the New York Times, and Quartz have both.

CNN, NPR, and WSJ only have position-by-position details.

The Globe only has an overview. 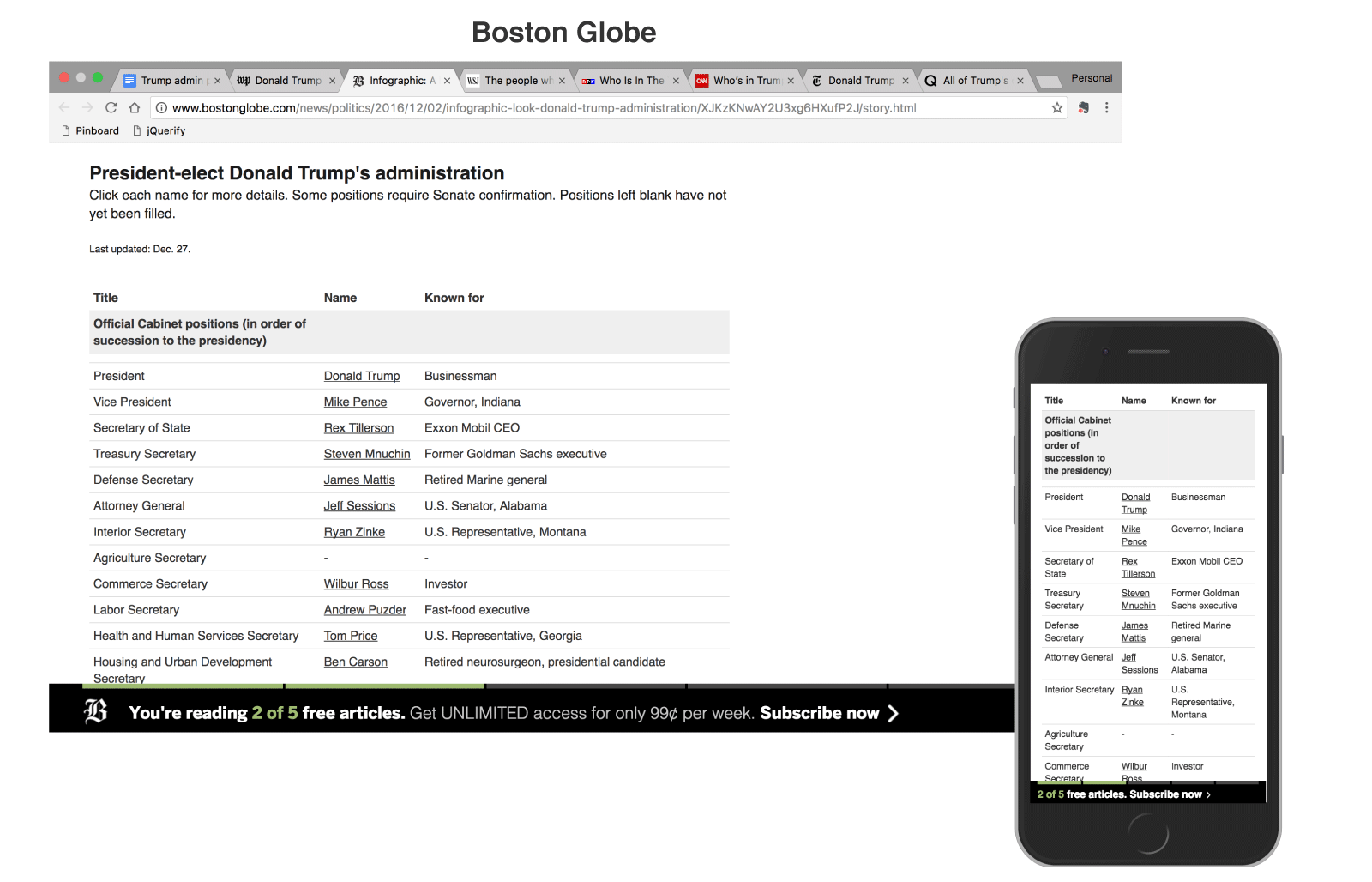 The publications also vary widely in what descriptions are included with each position.

NPR and NYT explicitly indicate which positions will require a Senate confirmation.

Others like CNN, Quartz, WaPo, and The Wall Street Journal use careful language to indicate passively the status of a position.

Do readers understand the difference between an “appointment” and a “nomination?” At Quartz we thought our readers would. The Washington Post calls people named to cabinet positions but unconfirmed by the Senate as “announced.” The Wall Street Journal labels the members of the same group “named.” CNN uses “nominated” for those folks, and “named” for those who require no other authorization to start in their role.

And what about copy fitting? Here’s a chart of the average length of the biographical blurbs that accompany each nomination or appointment.

All of the trackers except the Globe’s has photographs for each person discussed, which is one of the biggest reasons the Globe’s effort feels so sparse. WSJ and NPR use rectangular crops, the rest use round. The New York Times published their piece with round photos, but is now using rounded squares.

For a little bit of fun on your own, take a look at how many of the photos used are the same across publications! Here’s Elaine Chao.

Who Made It and How Quickly

In terms of getting a piece out the door, CNN won that perennial contest, judging by publication dates and page metadata.

And of course, what about the people? Here are the bylines and credits listed on each piece:

I hope you found this useful! Did I miss the tracker that you made?

Notice something else interesting about the way these publications made them? Let me know by shooting an email to david.on.source@yerit.com.