How rigorous self-assessment can transform your perspective

This week and last week in Source, you’ll find a large collection of work-related advice, guidance, and food for thought. Posts have covered how to run projects on time, ways to resolve workflow challenges, how to run shoestring QA testing, and techniques for preventing burnout1. So much great stuff!

As with most of our well-meant advice, we tend to target people at the heights or depths of morale—in this case, we’re considering career paths. We don’t do as earnest a job of giving advice to people in the middle, those metaphorically on a plateau or simply soldiering up a small hill.

Yet that’s where small adjustments can make a significant difference, because they can keep you from the extremes. My personal incremental adjustment is making myself unlearn things. Its power lies in its simplicity. Choose something you want to unlearn.

Tl;dr-aficionados, this is your stopping point! But I’d suggest if you’re stopping now, you need to unlearn that habit. 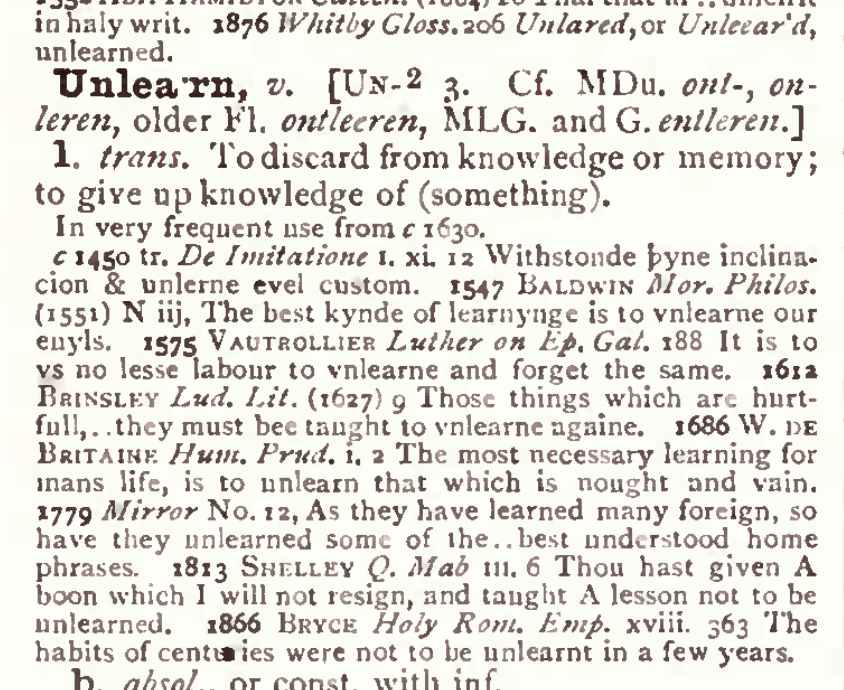 From an early edition of the Oxford English Dictionary

I doubt any readers stumbled over the word unlearning. We know negative prefixes (a-, anti-, dys-, in-, ir-, non-, un-, etc) and how they convey the inverse or opposite2 of a concept. Yet there was a time when that was new to “common” languages like English. To make it happen, negative prefixes needed to make their way via translation from the elite, literate world to the written local dialect and then into common speech.

Un- is fun among the negatives because it can express both a lack of something (unhappy) but also actions not yet performed (unread) or actions undone (undone). One of the early uses of the English root unlearn was by educated elites when they referred to common people lacking in education as the unlearned. Illiteracy was a huge socioeconomic hurdle—those “unlearned” people had to take oral recitations of translated works on faith, including rather important things like legal documents and mass. Unlearning emerged not long after, within the Protestant Reformation. The Reformation was a cultural revolt in Europe, starting in 1517 with Martin Luther’s “Ninety-Five Theses”—in Latin, railing against a corrupt, oppressive church—and concluding around 1617, shortly after “The Tempest” and the final works of Shakespeare3.

Luther and Shakespeare. Two very different writers with very different audiences, yet each bookending a ton of social change. We’ll sidle past the Reformation’s political battles, but there’s one big cultural shift that makes my point plain: During the Reformation, activists fought and died for the right to print books (like the Bible) in local languages so common people could read them. That sounds a bit pedagogical, but it meant that common people could read and form their own ideas rather than rely on an authority’s. Unlearning, indeed.

Much of The Reformation’s populist sentiments can be seen in the steps between unlearned and unlearning. The Oxford English Dictionary notes that by the time 1630 rolled around, unlearning was “in very frequent use.” Since then, the meaning of unlearning has stayed constant, from William Baldwin to Yoda:

“The best kynde of learnynge is to vnlearne our euyls [souls].”
–William Baldwin, English moral philosopher, A Treatise of Morall Phylosophie, 15474

“You must unlearn what you have learned”
–Yoda, The Empire Strikes Back, 1980

Unlearning has its share of popular use, but so has its more sinister, neighboring psychological concept: learned helplessness. You might know this term from Psych 101 or perhaps computer usability and user-experience design literature6. Learned helplessness was first coined in 1967, when behavioral psychologist Martin Seligman published the results of his studies on clinical depression, in which he used dogs as subjects. Using adverse operant conditioning (a.k.a., electric shocks), Seligman found that dogs grew conditioned to “uncontrollable” punishment, causing them to give up resistance or avoidance and just take the pain. The dogs exhibited what Seligman called the “retardation of learning,” unlearning under duress.

The implications of the phrase quickly hopped across a number of related concepts, from sociological ”resistance to change” to far more awful things like “battered-women syndrome,” where victims do not seek to leave their abusive partners7.

The reading list for learned helplessness in various fields is both edifying and alarming.

The modern use we probably know best is within technology—design, usability and technical communication. Early computing machines may be unique in teaching humans learned helplessness. How many times have you trimmed back an idea because of a technical limitation? Or shrugged and changed tacks when dealing with a weird quirk? Or fell down a rabbit hole of despair with a friend (or parent) as they explained a tech issue they want you to troubleshoot by phone? All of these are symptoms of “feeling that you cannot control your environment,” to borrow Joel Spolsky’s description from his influential software-development blog… way back in the year 2000. (References in technical journals go back to the early ’70s.) 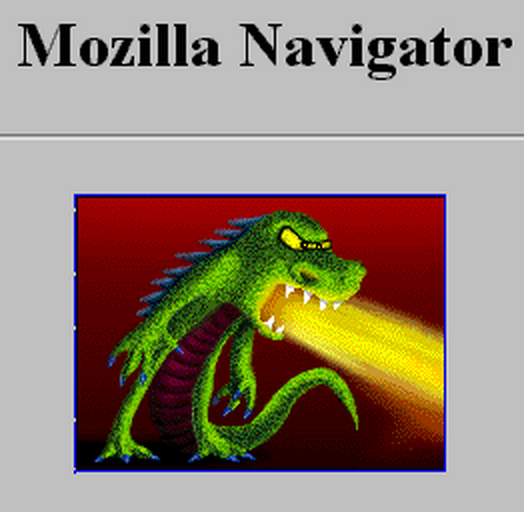 At some time in our careers, we’ve learned to give up and leave a default in place because it was too painful to figure out how to change it. (e.g., trying to get past the Mozilla 4.7 loading screen with a local file that has a nested HTML table markup error—the little fire-breathing dragon eventually became a kindred spirit.)

With enough of conditioning, we put on blinders. Once we do, it is much harder to identify issues reinforced by learned helplessness. How do we even know what we’ve already given up?

This is not solely a personal challenge. Difficulties with technology and office processes can be so intense they become a badge of solidarity. But if things do not improve, it can morph into learned helplessness and become a reactive, change-resistant culture. That can be one of the worst things to experience in a workplace.

Social psychology has many more phrases ready to help us diagnose the contortions we achieve as individuals and teams of humans. They’re tempting to employ as explanations—to give them names and feel in control. But let’s focus on forward motion, not just quasi-scientific identification.

A hypothetical situation (I swear):

A thread hits your inbox, mid-discussion, with a list of stakeholders already long. You’re called to a meeting to clarify the team’s thinking behind that big thing last month. One of the people adding you to the meeting is someone you find hard to work with—such a bad listener. Your hackles rise. You slump further in your chair, your neck feels like it is suddenly made of gravel. (You’re exhaling very loudly but don’t realize it, with your headphones on.) The meeting is only an hour away—the email thread is scattered and long.

But being prepared is essential. Last time you got an email like this it ended up being—

Stop right there. All of this is valid. It’s how human brains work—give yourself room to feel exasperation. You might have an accurate read on the situation, while others might not agree. Yet if you show up like you did last time, fretting about what happened last time, how much of the past will repeat itself?

The challenge here is unlearning a cascade of habits: physical tension, emotional stress, retreading the past, reading (passive-)aggressive intent on the part of others…. There’s a lot, just with one incoming thread. Once you’ve had time to react, give yourself time to respond. And while you’re responding, pick one thing to unlearn.

“Um, how?” Right, let’s do a bit of choose-your-own-adventure:

In a past job, I had the opportunity to briefly work with a career coach. My job at the time was in news but challenged by some corporate whims. The day-to-day felt busy but the broader trend was futility.

I was skeptical that coaching would be transformative—at best it might provide some tips. Yet my coach quickly earned my respect: no matter how detailed my explanations of crazy-making work situations, she refused to indulge it. She would not declare anything beyond my ability to address. The changes and adjustments she advised were tiny and frustratingly simple…but they were forward-thinking. Eventually I stopped bitching and dug into some painful self-analysis.

A habit of self-scrutiny can be jump-started quickly. I’m happy to share some hard questions from my own coaching. I re-ask myself these frequently—literally bi-monthly, tied to a recurring calendar event. (Yep, total nerd.) I set aside some time, an hour or two if I can, to write out my thoughts and examples. I add notes about what I think I’ve unlearned that fits the theme, or new things to unlearn. I read over past answers and themes. I notice how my body is responding. I note when I hate the whole stupid concept and just jot down “yes” or “no” or “:|”.

Learning to appreciate that relentless self-challenging was invaluable to me. (But that job still sucked.)

Unlearning can be a step toward addressing painful answers to these questions, as they arise. And remember: you may grow as a self-aware person, but new habits are always taking shape. They may not be good ones. Frequent check-ins help you form active behaviors rather than passive habits.

One individual adopting incremental personal improvements is a start. Changing a team’s culture is another. I believe the key here is leading by example. Sharing small victories with a mentor, supervisor, or boss helps you keep yourself accountable—a better email thread resolution, an improved meeting, better code, design or writing, a new interaction pattern around a chronic problem. And they can help you celebrate those wins. With shared, productive steps, it becomes easier to set the next goal.

If that seems out of reach, another tactic is to observe others, looking for your own habits and reactions. If you get a stridently toned message from a colleague, take a moment to ask if you’ve sent a similar email in the past. Watch interactions in meetings, study responses. Stay engaged in the self-check process.

It won’t solve every issue. But at least it gives you some active starting points.

Making a habit of unlearning things can be a day-to-day reminder of the value of rigorous self-assessment. It also has the benefit of small, steady improvements. It is well-paced for people in the middle—those trying to get off a plateau or those soldering uphill on their career paths. And building it into a self-assessment habit gives you the 30,000-foot view of the terrain, too. Both combined may be your best bet for avoiding the extreme heights or depths.