You Are Such Polymaths

Field notes from 48 hours with a bunch of news nerds

At SRCCON, OpenNews’s two-day conference in Minneapolis last month, we basked in the collective smarts of 220+ attendees and nearly 50 sessions. Afterward, we heard a lot of lovely feedback (people like snacks and unisex bathrooms and child care, and we are so very happy you were happy). So we’d like to reflect back some thoughts about you. Like: it was really clear, in a tangible way, that you have more gears, switches, and hidden functions than Furiosa’s war rig.

Check All That Apply

Case in point: at the end of day two, Scott Klein and Brian Hamman’s session took a news-nerd mini-census in the big common room. (As one does, with so many news nerds on hand.) Dozens of SRCCON-goers gathered in the big, trapezoid-ish space with corners labeled A, B, C, etc. They were told to vote with their bodies to answer multiple-choice question read over the mic. (Klein: “This is like Parliament. You’re going to stand where your answer is.”) We took photos from above to tally the responses. 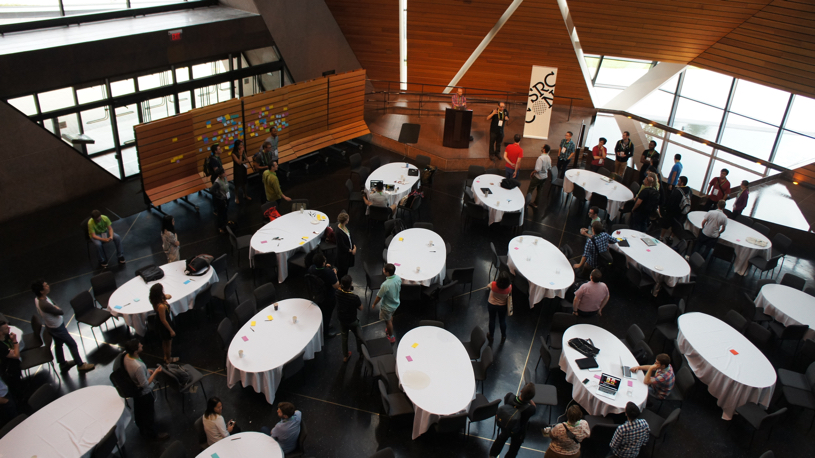 The room lacked a certain amount of regular corners. (OpenNews)

But this unraveled pretty quickly.

The first question was: “Who are you?”

The good humans of SRCCON shuffled around, thought the better of this choice or that, changed their minds, squeezed into huddles and back out. They mostly ended up somewhere in the middle.

From the transcript, the presenters:

This mini-census was designed as a prelude to sending this survey out more widely, and Klein and Hamman were testing which questions to ask. (More on this very cool project in progress.) So the revision will clearly be something like: “check all that apply.” And yeah, although we all knew how multifaceted our crew was, that moment embodied it so perfectly.

SRCCON acts like a big, in-person aggregation machine—what’s on the minds of presenters is usually on the minds of a lot more people. So we deduce that there is no shortage of cross-disciplinary work ahead, especially when it comes to design thinking and user research.

In the session they led, Livia Labate and Joe Germuska asked the very pertinent question: How do the prerogatives of objectivity and user-centered design complement or conflict with each other? Rachel Schallom of the South Florida Sun Sentinel said that her team has been sharing stories in-house with staffers who are unfamiliar with the pieces. They’re trying to bring in more outsiders, too, especially when it comes to testing on mobile. Partly, that’s to ensure that traditional newspaper readers aren’t being left behind.

The NPR team runs user tests on particular forms of content (slideshows, for example). They found that a content’s form carries certain expectations, and it’s best to intentionally design with those expectations in mind, either because they’re being followed or being broken. Or is this about the content of stories? Simon Nyi from Illinois Humanities noted that some of Chicago’s high-profile reporting about homicides gets few kudos from people actually living in those areas. To understand how readers are or aren’t understanding a story, ProPublica is user-testing pieces via video chat.

A few more questions from this session:

The field of user experience research has been highly developed by the design world, but it’s relatively new to journalism. In their session, Emily Goligoski and Maura Youngman opened up the New York Times’ research process with best practices like:

Plus, here’s a mantra from Goligoski to post near your desk: “There’s nothing worse than analyzing your data and realizing, there are a few questions we forgot to ask.”

Instances of the Class Human

Lest we forget, you’re teaching too. Many of you crunch data all the livelong day, but what about looping your non-coding colleagues into design and data, like Quartz did? David Yanofsky and Becky Bowers demonstrated a process (with a great name) called Run, Fix, Kill. Reporters are empowered to create their own charts, and then editors act as gatekeepers and clean-up crew, deciding to (you guessed it) run, fix, or kill the graphics based on in-house criteria. Some charts will be ready for the spotlight, some won’t see the light of day. Either way, a lot of time is saved within the workflow, and the non-experts learn what is/isn’t working.

Waite’s session was one of the few times that “git init” has ever made a person burst out from under a table, and it reminded us that we are all instances of the class “human.”

Oh, but there’s more. Lightning talks revealed the piemakers, ultramarathoners, and aspiring pilots among you. And of course, the extensive, crowdsourced coffee and tea station reminded us that you’re not just managing Sisyphean legacy projects, illustrating your own stories, and mapping the earth from the sky. No, you’re doing all that with an exquisite pour-over in hand.

Make no mistake: Some of you are instead holding point on just one specialty. We applaud you too, of course, and we hope you found more of your people at SRCCON. Anyway, is specialization what’s next for the polymath? (PSA for lonely coders, there is a Slack for you. Email Alexandra Kanik at alexandra@publicsource.org.)

So Many, So Much

Toward the middle of the “stand where your vote is” census, there was another question that sent everyone ricocheting like pool balls. It was: “Are you self taught?” Some people took that to mean, at journalism AND code, and there was a lot of shuffling and confusion, and then after a few false starts, it was revised to, “did you go to school for coding?” And although we await the official poll results, we can say with confidence: mostly, no you didn’t. Which is cool for any of the self-taught folks who thought they were the only ones.

So Who Are You?

You are so many, so much. You were hired based on a bum job description. You started years ago with a spiral steno notebook and a city hall beat. You started a week ago because someone who doesn’t understand Node.js did know they really needed you. You say things like, “Is an 85 percent Snow Fall worth doing?” You do live on the edge, but mostly you live on the command line. You are an old-school programmer turned new-school journo, or heck, you are a scholar or a barista or a bass player who thought this field was really cool. You have so many questions for everyone else. Whoever you are, wherever your corner, we’re lucky to have you.