A survey of 221 newsrooms showed me that there’s lots of work to do.

As a Knight-Mozilla fellow, I wanted to do some type of research during my fellowship that could benefit the news community. During my 10-month fellowship in Berlin in 2016, I spent about eight months researching, collecting data and interviewing reporters, editors, managers, and directors about their on-boarding and off-boarding processes.

I’m a big advocate for documentation, so for me this seemed like the perfect research topic. Before I started researching, I was really excited about the research and even more excited to hear how newsrooms write amazing documentation. I imagined that some of the large and medium-sized newsrooms would have this process down and would be able to walk me through their beautiful, thorough documentation. But, let’s be real, I think this was my ideal of how newsrooms work.

For reference, here’s how I define these processes in general:

On-boarding: the process of getting someone acquainted with the day-to-day systems, projects, and people in a job they may experience or work on (ex: providing them with documents or information they may need while working)

Off-boarding: the documentation that one writes up, as well as any process that one goes through (ex: handing off projects or sources) when they leave a job

When I got news of my fellowship in November 2015, I thought about the biggest issues newsrooms are facing but people aren’t really talking about. With newsrooms laying people off and downsizing staff, I became concerned about all of the amazing knowledge that could potentially be lost. Why not research how we can work together to think through these processes? Plus, OpenNews—which runs my fellowship program—is doing amazing work to help newsrooms tackle their issues with documentation. So I thought this research would also fit perfectly with the goals of OpenNews.

At NICAR 2015, I talked to a lot of friends who were starting in new jobs or had new people starting on their teams. Most of them talked about how much time it took to get the new people up to speed with everything and how their documentation is awful, and how they wish they just had time to actually write better documentation. For those starting in new jobs, they were worried about jumping into previous projects that people had worked on but not documented.

These conversations reinforced my thoughts about doing research on documentation and newsroom on-boarding and off-boarding processes. For those interested in reading more: I wrote a longer piece on Medium on why I’m doing this research and also included it in my research guide.

In July, I talked to Elite Truong from Poynter about the research I was doing and she wrote up a piece on my initial findings.

At the end of July, I facilitated a session at SRCCON, the conference that OpenNews puts on. The session was titled “The good and bad of newsroom on-boarding processes and how can we make them better”—notes from the session are here, and I also did a learnings writeup. The session was a good reminder of why we need to have more conversations about issues in our newsrooms and think through them together. People were really open about their problems, and talked about what it’s like to have no on-boarding process, and no off-boarding process either. It was also really great because we had a person in the discussion who did have a thorough process, and they brought their thoughts on how to implement those practices in other newsrooms. 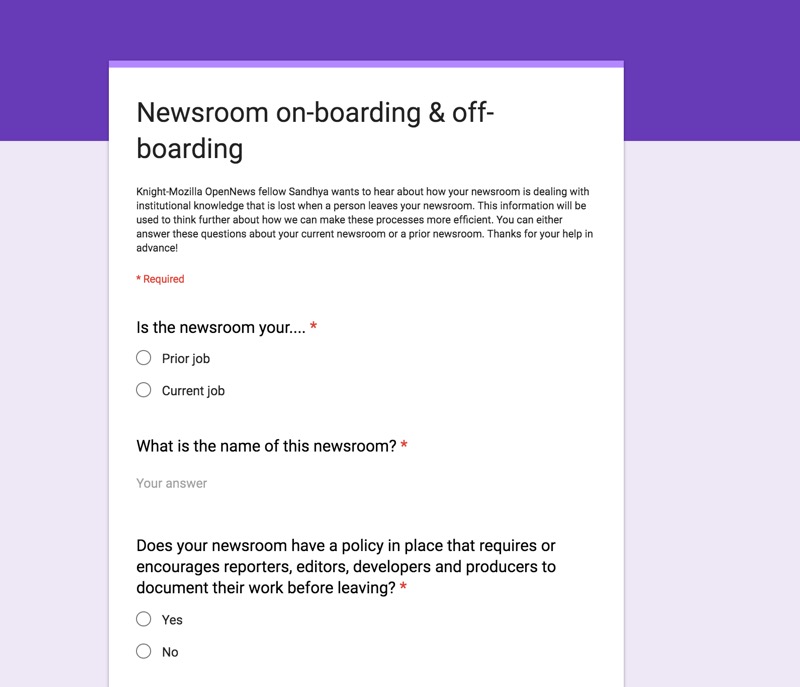 I heard from 221 newsrooms and 247 unique individuals about their newsroom’s on-boarding and off-boarding processes. A total of 289 people filled out the survey, which contained nine main questions and four “if-then” follow-up questions. I conducted 101 interviews with individuals who filled out the survey. Thirty of them were over Skype or over the phone. The other 71 were via email.

Eighty-six percent of respondents said they did not have on-boarding or off-boarding processes in their newsrooms. Those that did have processes noted that not everyone in the newsroom documents their work and those that do document their work are often the data/news applications teams. Additionally, most respondents came from large newsrooms (85 percent).

From the beginning, I wanted to create a guide that would challenge the way we think about these processes and find what works for some newsrooms, and what clearly doesn’t work in others, and share everything I found in one place. I’ve compiled the full guide to on-boarding and off-boarding and the guide on Github processes on Gitbook. It includes checklists for newsrooms and a more detailed explanation of everything I found.

Newsrooms are bad at documentation. We need better examples of how we can deal with the loss of institutional knowledge. In general, the biggest issue that I found across newsrooms of all sizes is time—and getting everyone on board to actually start writing documentation. Newsrooms often have complicated processes where everyone has to sign off and give their opinions on anything that’s created. Too often, these processes just end in frustration. Documentation should not have to be one of these long, awful processes.

The other main issue is that documentation is not a priority for reporters or editors when they are filing stories on a regular basis, so when one person leaves, all the institutional knowledge they have goes out the door with them. It’s really hard to instill a general understanding of why documentation is so important. In many newsrooms, there are one or two people on any given team that know the ins and outs of the team, but they rarely write down what they know. For these processes to actually work, there can’t just be a select one or two people on each team who have knowledge of all of the processes but just keep it to themselves. There’s also the issue of managing the documentation newsroom-wide, which requires coordination and commitment from every desk to actually make documentation a priority.

If you’re interested in learning more about these processes, you should read my research and the guide, available on Gitbook. You can even take my checklist and create your checklist from it as a guide.

If you use some of these tips in your newsroom and/or want to share your story, I’d love to hear from you. I can be found at @sandhya__k.