Last month at SRCCON, Darius Kazemi and I facilitated a discussion about GIFfable audio and the social web. The session was sparked by our work on an audio-sharing tool called Shortcut, which is a tool that makes it easy for podcast fans to share their favorite moments on social media. What seemed like a relatively straightforward project ended up spiraling out into a set of super-interesting questions around design, technology, and reasons why people share. What we brought to SRCCON was not so much an in-depth discussion of our code or UI, but instead, a set of questions and design provocations that would hopefully spark more ideas in this space, and result in new tech to share.

We started by introducing our tool, Shortcut.

Shortcut, at its core, is a web tool to help make it easier for podcast fans to clip and share their favorite moments on social media. It’s a collaboration with This American Life, the Tow Center for Digital Journalism, and the Knight Foundation Prototype Fund, and the development team included Courtney Stanton, Darius Kazemi, Dalit Shalom, Jason Sigal, and Jane Friedhoff (me!). We worked closely with Stephanie Foo, a producer at This American Life, to design the tool. You can read more about its initial conception here. Ultimately, Shortcut lets users clip podcasts and generate short, shareable videos that look something like this:

We generally understood that user-facing tools for doing this kind of clipping and sharing work were limited, but we hadn’t realized just how limited they were until we began doing user interviews. Particularly dedicated clippers walked us through their current process, which was often 10 steps or more, taking place across mobile phones, desktop apps, and web clippers, before finally getting posted to social media. We compared this to the breadth of options social media users have for expressing themselves visually: everything from the built-in GIF button on Twitter, to thriving subcultures around GIFsets, to simply screenshotting a selection of text from an article.

Some examples of sharing visual content on social media.

In comparison, my attempt to share a piece of a podcast on social media.

We began to colloquially refer to our tool’s output as an audio-GIF: not meaning GIF literally, but instead thinking about it as shorthand for a piece of audio that was easily shareable and had some sort of visually interesting layer to catch people’s eyes.

A Set of Design Axes for Social Audio Tools

The first step was to think about where, in the audio and sharing spaces, we were situating ourselves. Having discussed the idea of Shortcut in depth with TAL before writing a single line of code, we knew what our priorities were, and that helped us illustrate a set of axes around the space of social audio:

In exploring these axes, however, we realized that the term “GIF” had flattened our understanding of social sharing. Thinking back to our initial visual culture examples (the screenshotted/highlighted article, the GIFset, the reaction GIF), we realized just how many different forms of expression existed under this umbrella, and how many more projects could exist in the spaces laid out by these axes.

We split into two groups to discuss two facets of this subject: the technology underlying and supporting audio-sharing projects, and the design space around this concept as a whole.

Our own prior art/inspiration list is a mile long, and will be shared in a later article. But there was plenty of inspiration to list just from SRCCON attendees alone–this list definitely isn’t everything we talked about:

Fortunately, the design discussion was super-lively: unfortunately, it was just lively enough that none of us took written notes. Even so, the prompts we used will hopefully spark more experiments in the realm of social audio:

The TAL version of Shortcut will be released soon, and an open-source version is in development. We look forward to sharing it with the SRCCON community. As for ourselves, we look forward to next year’s SRCCON, too. 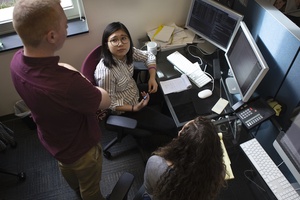